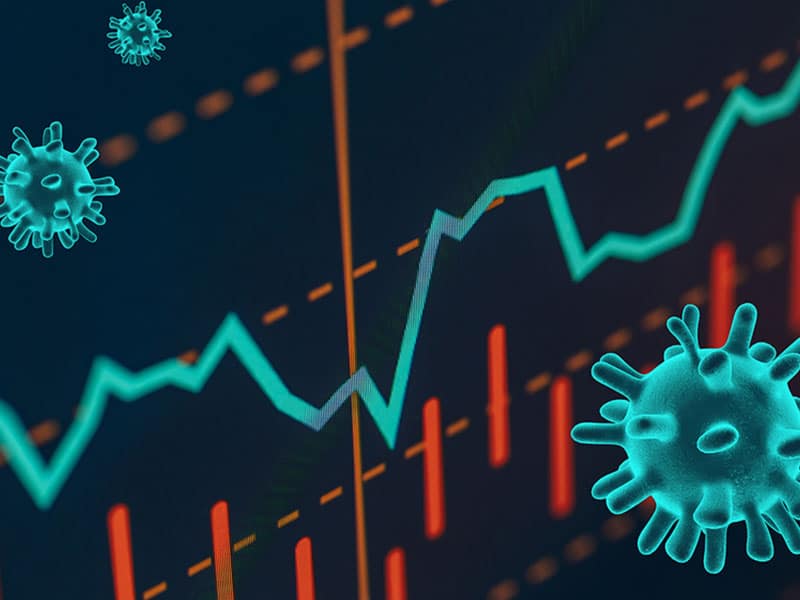 In our December 11 Market Commentary, we indicated that Lowry’s Research analysis found little evidence of a major market top in September which might have confirmed an end to the long-term upward trend. However, we suggested that new buying should be deferred until evidence of a sustainable market bottom had been reached. As Lowry’s points out, that normally requires one or more 90% Down Days (in numbers of stocks and their volume) which we had on December 24th, followed by a 90% Up Day or consecutive 80% Up Days which we got. Recently in analyzing the recovery Lowry’s identified only nine other instances since 1940 when their Short-Term Index expanded as robustly from an oversold condition as it did after December 24th. Even for the seven where the S&P 500 Index was still below its 200-day moving average, the S&P gained 35% on average one year after its lows; and was up 55% two years later. The NYSE breadth has been particularly strong since the December low which clearly reflects a broad- based rally, not just the results of a few very large companies. As Lowry’s concludes, the weight of evidence remains positive and supports further upside potential to new highs and beyond in the months ahead.

By year end Investors Intelligence, which measures the opinions of numerous investment advisory services, found that Bearish advisers outnumbered Bullish advisers for the first time since early 2016, which also turned out to be a good contrarian buying opportunity. In early December CNN’s Fear and Greed Index, which combines seven indicators, had bottomed at a record low of 6 (Extreme Fear). For perspective, at the height of the financial crisis in September 2008, when the S&P 500 hit a three-year low that index was at 12. By the time stocks finally bottomed on March 9, 2009 it had already recovered to 28 (Fear). By this week it had recovered from 6 to 68 (Greed), still short of Extreme Greed (starts at 75) where it was last September.

Some investors are concerned because we’re in our second longest economic recovery, but as we charted in our September Commentary, it has been the slowest recovery since WWII. Cumulative GDP growth has been only a third as much as during the other three lengthy post WWII recoveries. At least from the standpoint of being an abnormally small economic recovery, it could continue for quite some time. While not cheap, the S&P 500 is selling at about 16.4 times estimated 2019 earnings. That is actually the same as its five-year average multiple, although significantly above its 10-year average of 14.5. It’s unclear how much stock prices already reflect slowing 2019 earnings growth. FactSet shows a consensus of analysts who expect a -2.2% decline in S&P 500 earnings for the first quarter and an increase of only +4.8% for all of 2019. The biggest estimated earnings declines involve companies in the sectors with the highest international revenue exposure: information technology, materials, and energy, which reflects the weak global economy. A full year estimate of 4.8% could still result in earnings per share of +8.4%, assuming S&P 500 company shares shrink 3.6% due to net “buy backs” by corporate repurchases.

At the time of our last Commentary the most serious negative seemed the Federal Reserve policy of continuing to raise short term interest rates while at the same time reducing the Adjusted Monetary Base by $50 billion per month. Since then, the FRB has ended that policy.  We’ll be watching indicators that have  been helpful in recognizing major market peaks and recessions such as an inverted yield curve, a further decline in margin debt, investor and consumer sentiment, and several proprietary indicators that the three dozen independent research sources we use provide us. We’ve updated the adjacent chart which compares the last 16 months of a typical major bull market (orange line) with the latest 16 months (blue line). Clearly the  last sixteen months has been nothing like the normal excess investor euphoria which has typically accompanied previous major bull market conclusions. As long-term investors, we try to mitigate risk by avoiding lower quality stocks and limiting the amount invested in the more volatile issues, as well as reducing the emphasis on equities when it seems appropriate. While we may become more defensive in our equity selections, we don’t currently plan to reduce the emphasis on equities which is already fairly conservative for most of our individual clients.

In addition to our own research, and that from several brokerage firms, we utilize over 40 independent research sources selected with the benefit of over 50 years experience. Our investment process was developed over more than 50 years and is rather unique in combining fundamental and technical analysis to mitigate risk and build diversified, high quality, reasonably priced growth oriented portfolios. We manage large, mid-cap, and all-cap equity oriented portfolios as well as balanced funds for individuals and trust clients (minimum normally $1 million) in 15 states. We also indirectly serve about 2,500 investors through our mutual fund product. As a smaller firm, we have a particular advantage in managing portfolios since we don’t need huge marketability to acquire or eliminate stock positions promptly without significantly affecting the market. We are not in the brokerage or banking business and do not have the conflicts of interest and the other priorities those businesses involve.